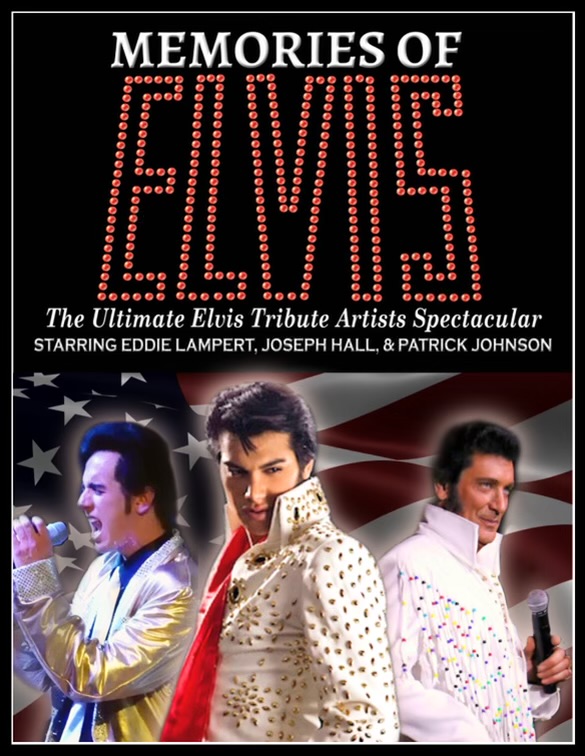 Memories of Elvis features three renowned Elvis Tribute Artists who sing and perform the songs of Elvis Presley from unforgettable 3 moments throughout his illustrious musical career: Early Elvis of the 1950s and 1960s, Elvis On-Stage in Las Vegas and Elvis during his “Aloha” Tour in Hawaii. Each of the three exceptional performers meticulously recreates the look, sound and feel of classic Elvis Presley concerts.

Joseph Hall, has been paying tribute to the legacy of Elvis Presley since 2006. He starred on NBC’s America’s Got Talent in 2008, making 6 TV appearances, viewed by more than 90 million people and placing as one of the top 10 finalist. Joseph has worked with Elvis Presley Enterprises, Legends in Concert, and has officially been recognized as one of the top Elvis tribute artists in the world today.  He says “My goal is to capture the essence of Elvis Presley, to pay tribute to him with the utmost respect to his legacy, his music, his image and above all else his fans.”

Patrick Johnson, star of Legends On Stage, is known world-wide for his Vegas-style Elvis stage shows and is considered to be one of the elite tribute artists in the business. He never fails to impress and entertain as he performs the songs of Elvis with exceptional quality and utmost respect.

Eddie Lampert is one of the top 50s Elvis Tribute Artists and is keeping Elvis’ memory and music alive. His is ability to sing, play guitar and swivel his hips will keep you truly entertained. Eddie finds it such an honor to travel and get to pay tribute to his hero.  All three performers are backed by a live band – in a musical tribute that brings “The King Of Rock N Roll” to life again.

Beer, wine, and concessions will be available for purchase at this event.